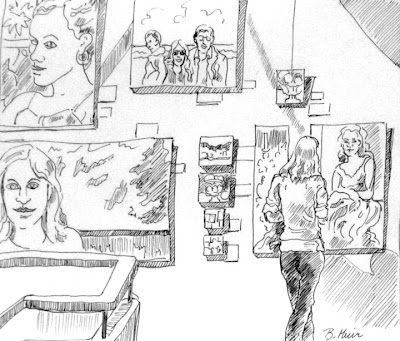 Art show in the Skylight Gallery
Black marker on bond paper
9 3/4 x 12 inches
Barbara Muir © 2010
(I drew this from a photo
of a visitor looking at my paintings
in a group show in 2008 -- I find
it hard to believe that that was just
two years ago.)
I used to work for a Canadian art magazine
right after university.  It was an awesome
job, but I really found the lingo peculiar.  I had been
to art school, and was a painter.  But I also had an
English Literature degree, and was hired for that combination--
artistic aptitude plus writing ability.  Still I found the way
people talked about art a tough slog.  Maybe as an Ottawa
Valley girl I'd a strong nose for nonsense.  Painters paint.
Were they really thinking about all the aesthetic ideals the art world
wanted them to say when they were creating, or were
they just making things up?  An excellent question.

Now it appears that some of the major galleries in North
America are asking the same question, because they
want to expand the demographic attending their
gorgeous institutions.  I was listening to an interview
the other day and the head of a large public gallery said
that galleries want to change an audience that is now
predominantly white, upper class, over fifty and female.
They want everyone to feel included in the gallery
experience, and they're starting by analyzing how people
who work in galleries "talk" about the art.

Aha I said to myself as I listened and went back into my
studio, coffee in hand, paint sweater smeared with paint,
blue jeans similarly decorated, socks not quite matching.
It turns out the very talk that confused me and
seemed snobby and alienating when I was a girl, is the
talk that's keeping most of the public away.  But here's
my thought.  I never feel confused (or rarely) about
what an artist is saying when I read artists' blogs.  Galleries
wanting to attract audiences should turn them on to
art blogs -- for the most part clear, productive, cheerful and
accessible chat about art. What do you think?

Have a talking-straight-about-your-work day.
Posted by Barbara Muir at 9:52 PM

Sounds good to me. I think we keep it pretty real and accessible here in blog-land. What an interesting post, Barbara.

Absolutely. I've never cared for the high falootin spew I hear coming from the gallery mouth. On the other hand I've heard it from the artists mouth as well. Generally when they want to make some sort of a "I'm really somethin!" statement designed to sound intelligent and add credibility.
I get it, let's all, artist and gallery alike, start spewing it the way it is instead of trying to make an impression that's not liable to last.

The passion is genuine in blog world as far as i have seen. It can take decades for the galleries around me to gear up for this change, but i am glad it happening somewhere to begin with.

I agree that we artists are really the best ones to describe our work, or to choose not to. In addition, I do think that some art lingo can be helpful as long as it's not pretentious or too oblique. I've noticed that Artforum has been a lot clearer in language lately.

Great sketching! Once again, you show mastery/mistressy with line and value.

Hear hear on the artspeak! I'm in agreement with how off-putting it can be. When i run in to it, I honestly try to give my ear to it...open my mind to learn what i can; but if truth be known most of the time it sounds preposterous! yay for artists who blog.

I think so too. Thanks for enjoying the thought process. Now I'm remembering all the wonderful people I've met in large galleries in recent years and wondering if they're part of the new movement to talk to gallery goers in accessible language.

I'm writing about this again tonight, because I don't want to imply that intelligent art conversations are bogus. But I do remember being asked the meaning behind my large portraits of women in dresses getting ready for the prom. I was trying to catch that moment before a big occasion, which can be really tough on young people, especially those (the majority) who rarely dress up. But some people wanted a deeper meaning. If I searched I could find one. So anyway. I will try to tell it like it is whenever that's acceptable. You are great!

Robert Genn talked about the deadly opening in one of his newsletters a few years back -- classical music very low in the background, a glass of wine, cheese cubes drying on a plate, and nervous artists looking anxious. Bob Burridge in California has openings that look like they're great fun, like a party. That's a great idea.

Thanks so much. I'm glad you like my sketch. I was inspired by your sketches from your trip. Works of art I should say. I'm writing a bit more about this tonight because you've got me thinking. I'm so glad your show went well -- it looked delicious.

As Eldon points out, I guess we all have to watch it. But I haven't noticed bloggers distancing themselves from the experience of painting. We all seem to be trying to explain what we're doing, and why in a straightforward way.

Hi Barbara, I love this discussion and agree with your insights. With my daughter in 3rd year at OCAD U this year, I've been seeing first hand how the young are indoctrinated into continuing this gobbly-gook artspeak. Over the years I've noticed that when a piece of art requires a lot of artspeak, it might not be speaking well enough on it own. It might have been conceptualized with a specific grant proposal in mind, trying to fill too big an agenda. I'll leave the "mights" in because there are always exceptions, but I am glad for the return of artists speaking about their craft, the realness of being "hands-on", the return of artists as doers who create art with hard work and practice.

Much as I find it incredibly frustrating sometimes when I come to the club, and the artists who can't paint with any kind of talk hush a great conversation. There's a lovely purity to the sound of no one talking, and people painting together. Whatever scratchy, and sometimes unappealing music plays in the background, a serious bunch of artists are trying to get something down. That experience tells you just how much explaining, cajolling, extolling goes on in the actual act of painting -- none. Thirty people can paint silently beside one another in pure concentration. That's why the made up art speak seems artificial, because it isn't present during the act of creation. I agree with you 100%.