Winter nostalgia in the Month of Change 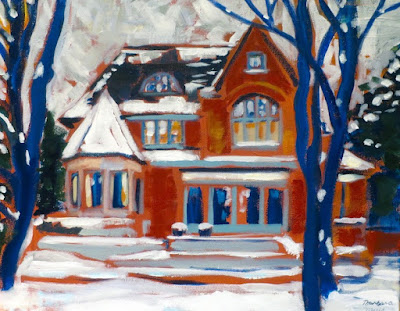 The Cake House
Acrylic on canvas
14 x 18 inches
Barbara Muir © 2011
Toronto is moving slowly into spring.  Only a spoonful
remains of the mountain of snow that was on our tiny
front lawn last week.  Steven and I went for a long walk late
this afternoon, and found ourselves commenting every time
we saw snow -- bits of it here and there, but mostly gone.

It was not a horrible winter.  Okay a lot of snow did fall,
but not until the end of January.  We had almost two
winter months with no snow -- December and
January -- not normal.  Yes we did have winter --
cold temperatures and a couple of really impressive
snow storms.  But we need both winter, and snow in
order for the summer crops in this part of the world to grow.

So despite the excitement over spring's actual arrival, we
are a bit nostalgic for winter.  We had a good one.
Kind friends and family, (okay a month of illness
in January), but even so if the season starts in December,
most of it was good.

I am working on a winter landscape, which I put away
to chill last week.  Today I feel like I've cracked the code.
A glorious feeling.  I was painting all day, and in
high spirits, but the piece is not done.  So I'm showing you one
of my favourite winter paintings from eight years ago.
It's of the back of a house on a path in our local park
called the loop.  At the time we called it "the cake house,"
because as it was being built it looked like an ever more
spectacular cake.

Have an enjoying the seasons day.
Posted by Barbara Muir at 10:12 PM

Barbara - this is a lovely painting...the colors are just gorgeous. Thanks for sharing.

Thank you so much Debbie,