To market, to market and Angela's Dahlias

I was planning to show you a photograph of my
former neighbour Angela's Dahlia today. For
more than 20 years the family living on the other
side of the wall in our semi-detached had an amazing
garden, thanks primarily to the passion and work of
their mother, Angela. Despite her afflictions,
a brain aneurysm, and diabetes, Angela was one of the best
gardeners I've ever met. It's strange that I was planning to show
you this exceptional flower today, and today her
husband, Vince, who moved away a few years ago,
visited our neighbourhood to see old friends and
reminisce about his wife. It's the one year and six months
anniversary of her death. 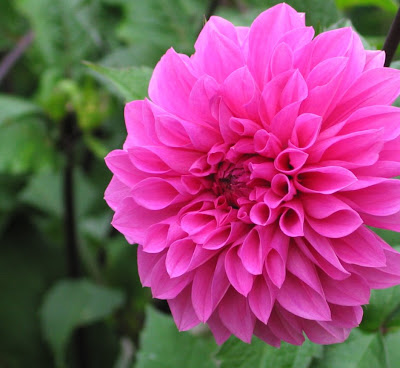 Angela's Dahlia,
September was the flower's time to shine

Steven and I spent a delightful late morning taking in the
Saturday morning farmer's market at the Brickworks,
http://www.evergreen.ca/rethinkspace/?gclid=
COOYldHryJUCFSj2QAodgC-6iQ
then visited the St. Lawrence Market, and came home
loaded with fresh fruits and vegetables, bread,
pie, strudel (but not just ordinary strudel, strudel
fresh baked this morning that was more like
delicious bread with fresh berries singing in the
middle).

The Brick Works market made me think of my
friend Flora in Nova Scotia. She would love it,
because they've made so many glorious gardens
surround the covered market area, with bent willow archways,
and little willow covered crawl spaces for children.
There's a grassed in circle dug down into the ground.
On a dry day you could sit down in it and lean back looking at the
clouds as bees from the ten foot high Cosmos, rambling
tomato vines, and giant Sunflower plants busied themselves
making honey. The beekeeper lady dressed in an
official white costume and netting head gear, said
the honey in the hives on site will be ready in two weeks.

We got home and had espresso with Vince on
our neighbours' porch. Yolanda served the coffee
and Angelo told us how to grow beautiful
geraniums.

Heading back across the street we saw
our neighbour Ely, who let us hold his bouncing,
blue-eyed baby, Lila. Chris, who lives on the other side
of the house, proudly showed off his huge, slick new
car, while the dogs and his baby chatted on our front lawn.
Louise and Joe saw us talking and came over to tell us
about a new art gallery planned for the neighbourhood.
We didn't get inside for lunch until four o'clock, and
just sat down when my sister knocked on the door.

It's true it's lonely without the kids, but if it is
true, we haven't had a chance to find out yet.

I'll drink a toast to Angela and her wonderful
gardening skills tonight. The inspiring thing
about the markets in town, is seeing abundant
evidence that her talent is spreading.

Have a growing-magnificent-flowers day.
Posted by Barbara Muir at 4:07 PM

Email ThisBlogThis!Share to TwitterShare to FacebookShare to Pinterest
Labels: a beautiful day in the neighbourghood, Angela, Dahlias