My friend Eldon Warren frequently demonstrates the process
he goes through to get to the final result with a painting.
For my painting of Tobias, (see yesterday's entry), I
went through a series of decisions to get to the final
painting.

One of the reference photos of Tobias featured a cute,
little boy dressed in neat party clothes, holding a soccer
ball. I did a sketch of this image one evening and
realized that the picture would be too static to turn
into an interesting painting. It was a cute picture,
but cute wasn't going to cut it. I did a quick sketch of another reference shot, the
one I ultimately based the picture on, and instantly
realized that it had potential. I sent off my first
sketches, and the initial sketch on the canvas
size we had determined, and the assistant producer,
agreed with me that the moving image would be more
interesting. 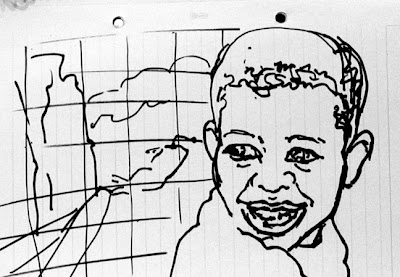 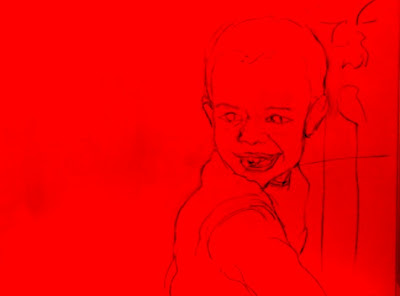 First drawing on the orange
ground coat on the canvas.

A tiger slept in the background of the photo I picked, but it
was at an awkward angle and wasn't dramatic enough to
add some zip to the painting. I was thinking of putting
zoo animals into the painting, so I took a bunch of children's
books on animals out of my local library. But thinking about
this idea, I realized I couldn't really mix lions and tigers
and giraffes in one image, because they wouldn't be together
at the zoo. One photo of a tiger and her cubs grabbed me,
but it was the wrong way around. I photographed the
photo, flipped it, and used it as a reference for my
clearly visible tiger and cubs. 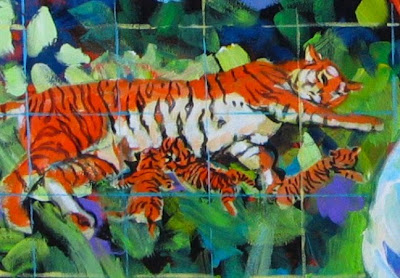 I started fleshing in the painting, but not too much so I
could work on it during the taping of the show. 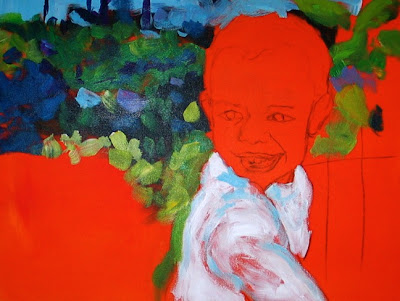 The painting begins, still wet
acrylic on canvas
Barbara Muir © 2009
After the initial taping, I kept working on the painting, and
the camera man came back to film me as I worked on the
painting. Then I finished it up so it could be in the room
on time for the reveal. So these are some of the decisions I
made in the process of getting to the final work. For the completed
work see last night's blog.

Have an as-long-as-it's-fun-I'm-working-on-it day.
Posted by Barbara Muir at 8:46 PM

That is so amazing to learn your process. You were very generous in giving such a detailed explanation of your steps and choices. The painting is wonderful and I am so proud to say I "virtually" know you.

Thanks so much. I'd planned to explain the painting all along, but I couldn't do it until the show had aired. Now it has and voila.

Thanks for your very kind message. I'm so glad you like it, and that Tobias's parents do too.

I love the fact that you include drawing is part of your process. Im also taken with mommy tiger and her cubs as a painting in itself - o fearful symmetry
xoxo marcia

I love seeing this post about your process. So interesting. Love the mommy tiger and hers babes... so would my boys!

I don't always start with drawings off the canvas, but I usually begin drawing on the canvas. I do draw when I'm not sure where I'm going, or I'm trying to learn a face. As you know the human face is completely different when you move a fraction of an inch in any direction. So sometimes, as in this project, I draw to figure out which view I want to present.

I was trying to make a painting that both the parents and the little boy would like. I love cats too. And the big cats seem like the source of all catness. Thanks for your kindness.

Hi Barbara, I gotta say again how much I like this piece. And the thought process makes it even more enjoyable. Most of the things I do starts right on the canvas with out drawing but sometimes it's a must when something has got to be just right. You draw so well, it's no wonder your paintings turn out so well done.
Eldon