"It's too cold to paint"

I was at the art store this morning picking up supplies
and asked one of the young women at the counter if
she'd been painting lately. She usually talks to me about
what she's working on, but not today. With an entirely joyful
and mischievous look on her face, and a lovely pink crochet
scarf around her neck over her black sweater and jeans she said,
"nothing much. It's just too cold to paint -- I mean who wants
to? I'm hibernating." I laughed because a lot of my friends
lately have either said that they want to be like the bears and
hibernate, or that they simply are hibernating whenever the
opportunity arises. 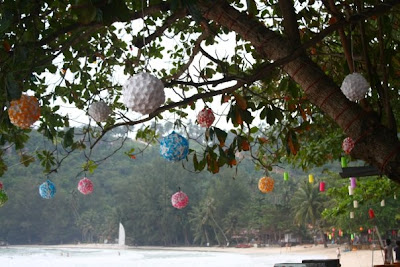 So for all of you out there who need an escape, here are
some photos of my son and his girlfriend's Christmas vacation
in Thailand. I've told you before that Christopher is
working in Korea, so he and Megan
wanted to take in the local sights while they were there.
Thailand is much closer to Korea, than Toronto. And
we are currently deep in the cold, white stuff --snow. 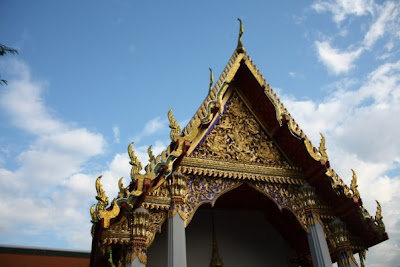 A Thai temple
decorated in gold 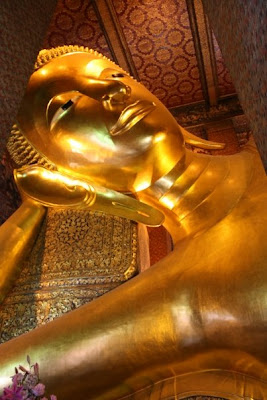 Christopher says I would
love the gold everywhere
Here's a sample 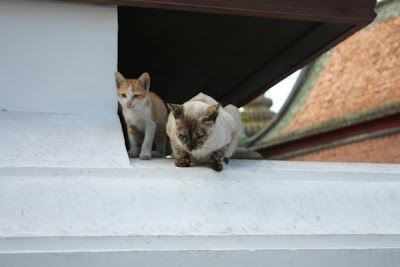 Some of the temple cats are Siamese
because Thailand used to be Siam.
The one on the left looks like our Fiona.

These photos are a dream...They are so fortunate to be able to experience these places. The tree..wow..I love it...makes me think of Hawaii. The temples, the Buddha..I would be heaven. The cat on the right looks like my Ozzie!
I know what you mean about to cold to paint...even my tubes of oil are stiff as my hands! I know it is MUCH colder there....stay warm!

Beautiful pics and a wonderful narration!! Thanks Barbara! Now, I think I'd better blog about my painting week.....it's too cold to do anything else! ha ha
Flora xo

Thanks. I just noticed that I said the girl had a pink, crocheted "scar". Of course I meant "scarf."

What can I say, blogging late at night after some wine. Maybe not a good idea. It's actually warm enough inside to paint, but I am drawing!!!!
Painting has to wait.

I just like how naughty the girl thought she was being, saying it was too cold to paint in an art store. They are quite rebellious in the store, because it's increasingly being invaded by craft stuff, and all of the staff are fine artists. I get it, and they really make me laugh.