When I was a little girl I used to dread Sunday. It
was as though the whole day had a hush placed
over it like the giant nets they used to catch bears.
The good part was that if I made it past church,
and my father's insistence on "serious" music,
there might be a ride in the country so my Dad
could take photos of my little brother and me
-- usually a pleasure, and ice cream cones in the summer.
And although I'm not a big fan of red meat,
the Sunday roast was not some cheap cut
my mother cooked in the pressure cooker with
so much gristle that the dog kept banking on our
kid-sensitive gag reflexes.

Sunday dinner was opulent. My father carved
the roast, or turkey, there were fresh baby potatoes, or
generous baked potatoes melting large dollops
of butter, and the whole menu was topped off
by one of my mother's fancy desserts, which
got better and more sophisticated in scope
with every passing year. Ultimately
she could throw together a glorious glazed raspberry
French tart, and her own home made ice cream,
or raspberry sherbet at short notice.

These days as I know I've said before I bask in
the nothingness of Sundays. Today it is even
sunny -- although frighteningly cold. I am
going to try and go for a walk with the dog.
That may not sound that impressive, but
because of my broken ankle, I've been leery
of walking in the snow, and I fell on Friday,
which makes me doubly edgy.

If that's not successful there's the Globe and Mail
which I devour from Focus (world issues) to Fashion
(Karen von Hahn is one of my favorite writers in the
paper). Then there's visits with friends, talking to my
mother on the phone, Skyping Christopher who's
in Taiwan for Chinese New Year, talking to Sam at university.

After all is said and done, Steven and I will have a
modest dinner -- nothing like the feasts my Mother
used to serve -- but the main thing is it's his night to
cook. So I get to paint, prepare my notes, and revel
in nobody needing me today. 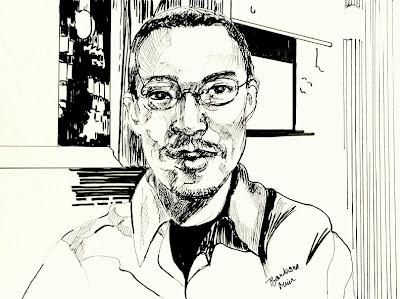 Here's a picture of Cisco Cheng from the Skype party.

Email ThisBlogThis!Share to TwitterShare to FacebookShare to Pinterest
Labels: Sunday is luxury time. happy day. have fun in Taiwan and Windsor.

Oh, it's always so wonderful drop by your place.

Thanks so much for dropping by.
I hope you're having a great week.

Hi Barbara, Nice post and well written to boot. Paints a lovely picture of Sunday and those Sunday dinners. Those old days were a little hushed and as you know I believe , pale. And peaceful.
EW

Hi Eldon,
Aside from the fact that we were
kids and bristling with excitement
all the time, those days were down and
out dull. Hard to imagine now.
I learned two things from growing up
when I did -- how to love reading (a dependable escape), and being outside.

Yeah, Reading or getting out side. (or napping which I still do a lot)
I used to run the back roads and skinny dip in the farmers ditch. I still run the back roads. :)If ya like I'll share a pohm with ya I wrote about one of those ditches.
EW

You are funny. Yes napping was also
big. We used to play in the ditches across from our house, but we were dressed -- shorts, T-shirts and high rubber boots in summer, snowsuits, woolen mittens and hats, and high rubber snow boots in winter. The ditches were always muddy until the
mud turned into ice.

Send me the poem.