Here's another class sketch from a few years ago,
done in acrylic on rough watercolour paper.
I was trying a turquoise blue ground. I soon
discovered that blue was not the best background
colour for me, but it works all right with this
particular face.

I had a very long and rewarding day at school
today, and came home to paint. But my brother
told me that the French election debate was
heating up, so Steven and I watched both
the French and English shows of the debate,
switching back and forth between them. 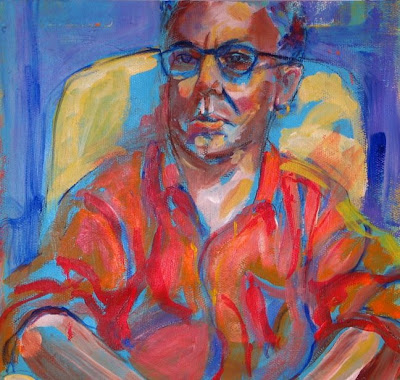 The Canadian election is definitely not as high
profile as the American one, but as far as I'm
concerned it's just as interesting. Although we're
much smaller we're facing many of the same
problems. Yet with the economy still in
crisis, our brave debaters raised the topic of art
and support for artists again. That's because the
province of Quebec recognizes the central role
the arts and culture play in their thriving tourism
industry. But the driving economic force in the
country has been oil, and in an election the concerns
of the oil patch trump art hands down.

The main thing here is art, and I've got to get back to
my painting. I hope you're having a good time
with yours.

Have an art-is-the-best-party day.
Posted by Barbara Muir at 8:32 PM

Email ThisBlogThis!Share to TwitterShare to FacebookShare to Pinterest
Labels: a lively debate, Get the vote out., the art party

SUCH fabulous color! You are so free... and I love the mom and baby from Monday!

I'm glad you like the colour. I love
your landscape from the sketch painting. I think of you when I
drive past the fields north of the
city on my way to teach. I squint
my eyes and imagine how the landscape
would look if you painted it.

Great painting! His face is expressive and very well painted!

I appreciate your compliments.