Okay in my travels in the past week somehow I picked up
a doozer of a cold.  The moment I felt that baby coming
at me, I opened a package of Cold FX and began the
process of warding it off.  Yesterday was a bit rough.  I
was tired, maybe that's too mild -- exhausted after the
weekend's festivities.  But I did the intelligent thing, had
a long nap, wrote some emails, took the Cold FX and
began my recovery.  Today I woke up feeling not completely
super, but optimistic, which is a clear sign of recovery. 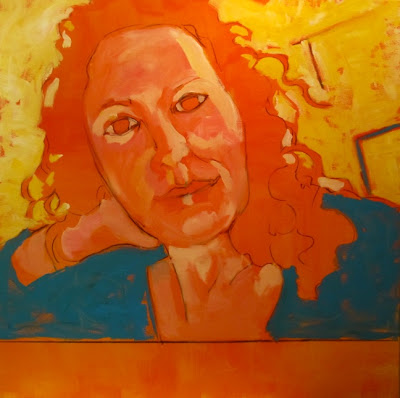 Taking a break from painting
Stage 1-3
Acrylic on canvas
30 x 30 inches
Barbara Muir © 2010
(This is my second in my series
of paintings of Henriette Sonne,
the Danish painter who
lives in Norway.)
This was one of those days that teaches you all over again
how fall gets rid of summer.  Already the trees north of the
city are turning colours despite the fairly warm temperatures
we've had here.  Then came the fatal combination -- heavy
rains and wind.  That's the fall formula.  My huge Cleome
plants in the backyard have fallen over.  Rain flooded the
fields and ditches at school.

So tonight I decided to do a little painting on one of the
series of Skype paintings I intend to do on my friend
Henriette Sonne in Norway.  I don't even know if Henriette
knows about the series, but she shows at the same gallery
as I do in New York City, so I thought it would be...
fascinating to have paintings of Henriette working
at painting in a show. We'll see how it goes, and how
they ultimately turn out. But it's a pleasure even thinking
about it.  And that was the doctor's (Dr. Muir -- my favorite
doctor - me) orders. Have some fun, paint and start a new novel.


Have a stopping-that-cold-in-its-tracks day.
P.S.  I heard the coolest thing on CBC Radio
today about a choir program for people
with Parkinson's disease.  Singing helped
people keep vocal function and cognitive
function and the neurologist said it releases
endorphins which actually have a positive
effect on brain chemistry.

Sorry to hear Mr. Cold caught up with you. I hope he isn't able to stick around long.

Thank you. I'm working on it.

Yes the cold is trying hard, but they sell this herbal stuff here, Cold FX and it is incredible at stopping colds in their tracks. I am improving rapidly.