Laughs in a serious world

It's a cold and rainy day here in Toronto.  After running
around doing errands, and planning to put things back
in order after the Artwalk studio tour, I settled in to
watch Jon Stewart and Stephen Colbert.  If I were an
American I'd be joining Jon Stewart's Rally to Restore Sanity
in Washington.  I know I'd have fun, and laugh with
at minimum thousands of people who find his humour
funny.  Plus of course I understand his serious message. 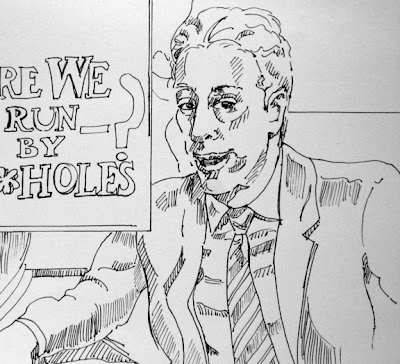 Jon Stewart  on The Daily Show
He asks the burning questions of the day -- with humour
Black marker on bond paper
81/2 x 11 inches
Barbara Muir © 2010
We could use some Canadian comedians organizing
a similar march here, as Torontonians seem to be
on the brink of voting in Rob Ford, the current front
runner in the campaign for Mayor of Toronto, who makes
no bones about the fact that he was charged with DUI in
1999 and for assault and threatening death in a 2008
incident with his wife. But he doesn't have a criminal record.
Every intelligent person I know is against the idea of
voting him in, but what does his predicted majority
say about our city?  A lot of us are very concerned.

Of course in their Washington rallies Colbert and Stewart
are trying to provide an alternative to bizarre figures who are
popular for no reason I can get like Glenn Beck.
Don't worry I won't stay on this theme.

Have an enjoying-whatever-makes-you-laugh day.
P. S. If this is too heavy and you feel like looking on
the lighter side hit the link above.

No! You can stay on that theme! I KNOW! We flirted with the idea of driving down for the rally - it would be a lot of fun. Thank goodness for Stewart and Colbert and Rick Mercer!

Yes laughter- its a survival tool - keeps us sane, and when you think about it, it's also good exercise because it engages the abdominal muscles and unclenches them as it were.
As for Rob Ford - you'd certainly have David's ear! He's a Mike Harris clone isn't he.
When we were driving through the exhibition grounds, late August, David spotted him walking across the street on Dufferin obviously campaigning.
D quickly rolled down his window stuck his head out and shouted boooooooo in one of his loudest voices - Ford didn't blink, just kept walking but a young woman looked startled and I was quite embarassed. We drove on.

three cheers for Stewart and Colbert and may the rally be well attended and full of chuckles.

Wouldn't it be fun to go. Probably the most fun ever, because I know I'd
enjoy people who enjoy Jon Stewart's humour.

Thank you. I'm with David. Yes BOOOO! Toronto can't be serious about voting for him.

Yes three cheers indeed. Back to sanity would be good. Or to sanity.

I hope everyone has a wonderful time.