Who is on your cheerleader team? 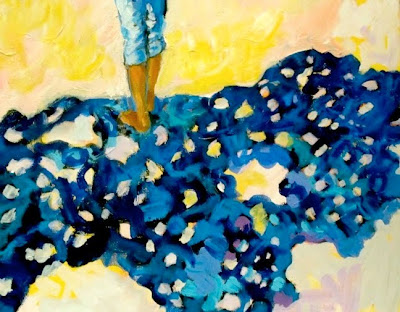 Summer shadow blues
Acrylic on canvas
16 x 20 inches
Barbara Muir © 2010
(Remember I said I had an idea for what
to do with this one. This is it. I still
have to add some shadow to the figure,
but I like the combination of figurative
and abstract.)

Is this an idle question -- I don't think so. I hope the
first person on your team of supporters is you, because
without belief in what you do you can't keep going.
But how about your friends? In the art world
there are people who are supportive, detractors,
and those who just don't care. But this job requires
a lot of nerve. After all many people won't understand
either what you're creating, or why you're creating it.
Some fierce little person inside has to keep going
through snide remarks, lack of appreciation, and
outright put downs. But that person (you/me) also
has to learn to move away from the detractors, and
seek out a great cheering team. I don't mean that
you force people into a corner and say "hey -- tell me
I'm good!" I mean you seek out people who like what
you do, and who like you, and those friends,
acquaintances, and as the circle grows, total strangers,
are your positive back up.

Now Alyson Stanfield, who writes the artbizblog,
I can imagine might say there's another group. Those are
converts. The reason you can't rule out people who
outright dislike your work altogether is twofold.
Tastes change -- the tastes of your audience -- and you
change -- your work evolves and goes in different
directions. One day you'll be at a show
of your work, and see a former critic approaching
you beaming. Are you going to turn away because
that person didn't used to "get" your work. No.
You're going to beam back, and possibly have a
convert, even a collector now on your team.

A final idea. Don't let detractors stop you. Not if
you believe in yourself. I heard the other day about
a wonderful writer who didn't write for 20 years
because of a cruel remark. What a shame. Twenty
lost years. See what I mean? Take the cruel remark
to your closest supporters, and they'll help you
let it go and move on.

Have a cheering-on-the-people-you-believe-in day.
P.S. Thank you to my team of supporters. I rarely
hear any cruel remarks anymore. And if I do I
either weigh the remark's validity, or I discount it,
or I head right to my friends for a talk it, and drop
it discussion.
Posted by Barbara Muir at 2:32 PM

Barbara: Sometimes the detractors are actually motivators. Gallerist Leo Castelli said his detractors made him really want to prove something.

But each of us is motivated by something different. We just have to figure out what it is and embrace it.

I'm in the cheerleader camp. I like to hear "good work" a lot! I'm grateful that you are so generous with your kind words about my work.

Oh Barbara, you are one of my cheerleaders, and I can't tell you how much I appreciate it! I'm equally fond of your work, and more importantly of you--you are the kind of person we all need in our lives! Thank YOU!

Barbara,
Finally someone with a brain.You are so smart and I sure needed it today.
Again, I got rejected by a daily painters site owner.You have been a cheerleader to me today.
More power to you Barbara.
Thanks for coming to my life.
Also I must add how much I am crazy about your art. The colors are amazing.

well, I certainly appreciate your blog today. Tomorrow is my first show and I've already decided it's ok however it turns out cause I can come home, read a few blogs and know there are a bunch of artists out there who are just painting and experimenting and having fun regardless of what anyone says or doesn't say about their work. It's all good. I have met some of the kindest, happiest, and most supportive people in the art world. And I really love your shadow paintings.

Boy I was thrilled to see your comment here today. I agree detractors can motivate people to succeed, but it's sad when they stop talented artists in their tracks.

Alyson you deserve a cheering squad one million strong, and probably have it. I have friends across this country who talk about you, and share your ideas. That's pretty exciting to me.

We all say three cheers for Alyson!

I open your paintings and I'm always so dazzled and impressed. Plus you try everything, are always experimenting. And when I think of trees, or try to paint them, I can't help but think of you.

Thanks so much for your sweet comment.
You've made me so happy!

I went on your site and I was impressed with your portraits. I love the women in the head bands -- cool and unusual. Keep painting. You're the one who matters.

I think the show is going to be great. You've got some really super landscapes. What's not to like. Just smile and all will be well.

One day you should publish a book with a selection of your daily posts, Barbara! You always find the right words to express so many people's feelings and thoughts. For me, it would be one of those books, I would finish with a satisfied sigh, thinking that the author is someone I would love to meet and whom I could identify with. Thank you so much!
Beautiful shadow painting!