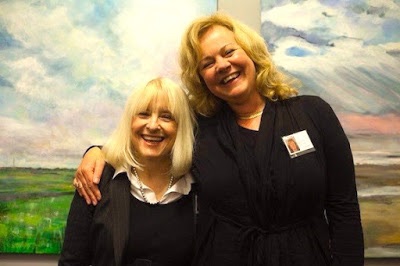 The photo of me and Miranda Brouwers that appeared in the
Dutch newspaper, The Carillon on December 29, 2015.
We are standing in front of the landscapes
Miranda showed at the Florence Biennale in October, 2015.

Tonight I’m going to look back on a wonderful time in my life showing
in the Florence Biennale. That show was up for 10 days and the artists who
were at the show sat the show all day almost every day.

I met my wonderful friend Miranda Brouwers there. And she and I started
The Happy People group, going around and visiting artists who were at the
show, and asking them to put their arms in the air for two minutes to lower
their Cortisol levels. I’m sharing a quote from the blog I wrote when the article
appeared in December 2015 when Miranda was featured in the Dutch newspaper
The Carillon talking about our experience. Enjoy.

"Miranda Brouwers, a friend I met in Italy,
was the woman who started the Happy People Project
with me at the Florence Biennale in October.  We
encouraged friends we met at the Biennale to put
their hands in the air for 2 minutes to improve
their mood and make them happy.  And it worked.

Since her return from the Biennale, Miranda hasattracted a lot of attention in The Netherlands for thebeautiful landscapes she paints of the area whereshe lives in Lage Zwaluwe (which means LowSwallows).  This December (that was 2015) she was
part of the Serious Request Project, a fundraiserbroadcast all day and night in the Netherlandsfrom December 18 - 23 by top Dutch radio and TV personalities.Her painting, Aankondiging van de lente (Spring is inthe air) was auctioned off by the Red Cross to raise moneyfor the Syrian refugees, and was in a special show at theRoyal Talens Experience Center. 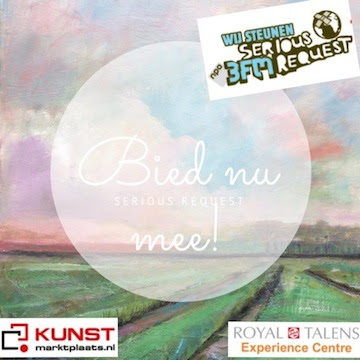 Low Swallows with the Bidding Ad for Serious Request
Today (December 29, 2015) Miranda is featured in the Dutch
Newspaper, the Carillon. Miranda spoke about her experience atthe Biennale, how wonderful it was to be with other artiststrying to make the world a more beautiful place.  Shewas delighted that she now would have opportunitiesto show her work anywhere in the world, China, New York,and other spots in Europe.
In the interview for the article, Miranda explainedwhen asked about the best thing she experienced atthe Florence Biennale, the wonderful artists she met --and she told me over the phone, "You (meaning me) andthe Happy People Project."  She loved the fact thatwe helped each other to be happy, and we've continuedto do that now that we are thousands of miles apart.It was ironic that we were so busy taking photographsof Biennale artists putting their hands in the air in theAmy Cuddy, winning and cortisol lowering position -- thatwe didn't have a shot of the two of us raising ourarms together.So here is the photo that will go in the paper,Very exciting.Have a making-joyous-friendships day."

Note:  Miranda and I talk on the phone almost every
Thursday, and we showed together again at the Carousel
du Louvre exhibition in the Louvre in Paris in 2016.
Posted by Barbara Muir at 10:52 PM