During the recent American election I was a bit
nervous that all of the friends I'd made through
blogging might be Sarah Palin supporters. I went
through a kind of dark night of the soul, and
realized that being Canadian gave me some
freedom from angst if I wanted it. In other words if one of
my favorite artists happened to be a Republican
-- well -- wouldn't I still love the work, and the
person? If I can be friends with Conservatives in
my own country, who have nothing in common with
me politically, couldn't I do that across the border?

I had decided that yes, I want to be from the country
of ART anyway, and in that country we are all one.
But then I read the delightful blog, by Lisa
from On painting titled Which Candidate Would
You Paint? and found out that most of the artists
I enjoyed were Obama supporters. My excitement at
this revelation was enhanced by the extremely
artful way Lisa's piece was written, and the ironic
responses from her artist friends.
Check it out yourself at:
http://onpainting.wordpress.com/2008/10/03/which-candidate-would-you-paint/

I still stick to my earlier sentiment. Politics should not
be a dividing line in art. At the same time I'm grateful
to On Painting authors Lisa Towers and Bill Jones
for their satirical take on the combination of art and
politics.

We frequently honour the art we see on line,
but the writing some artists produce
is equally compelling. Edgar on Arty Fice
http://artyfice.blogspot.com/
goes pretty deep from time to time on subjects relating
to the world of art. Theresa Rankin is a warm and
humorous writer, Eldon Warren first hit me with his
"Geez Louise", and that phrase has been rattling around
my brain ever since. David Lobenberg adopts various
persona when he writes, and his blog presents his
zany take on the art he's working on. You can get to Theresa,
Eldon and David's blogs from last night's tag list. 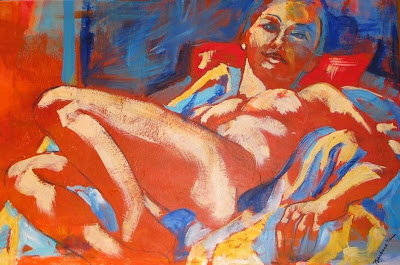 The painting tonight is a figure study from my Tuesday
art group.

At school we've reached the hard end of the
semester, marking in every spare minute. All of the teachers
look equally wired. Luckily they're very funny --
their wit makes it worth teaching there, despite
the 2 1/2 hour drive home tonight
at 20 clicks (12.4274238 miles)
an hour. Snow my southern friends -- in
Toronto that spells chaos. Before last winter we hadn't
had much in 20 years. Got to go and find all my winter
gear, so you get painting now.

Have a yes!-read-that-great-book day.
Posted by Barbara Muir at 7:52 PM

Email ThisBlogThis!Share to TwitterShare to FacebookShare to Pinterest
Labels: amusing, love it all., writing on the net

I envy your loose style, Barbara!
Amazing how you capture the right movement and proportions with just one big brushstroke. Great work!

And I love your style -- your colour,
your light.

I can't believe you tossed this painting off here- "oh yeah, this is a painting I did.." as if it did not have IMPACT and GREAT WORTH. I'm looking you in the eye and nodding Yes. Oh yes.

Sometimes you get a better reaction blogging, than when you hang something in a show. I did hang this painting, and people felt decidedly awkward around it. Nudes don't really sell here, so I rarely do them. I did really like the light in this one, and I'm glad you do too.