It's been a strange and wondrous day in ways I can and can't
describe. Some of my shyest students gave great, brave
presentations today. One of my fellow teachers read an
eloquent passage to me from a book he wrote. When I
got home after driving beside a spectacular sunset, I saw my
youngest son and his girlfriend briefly before they went out
for dinner, and my son looked extremely happy.

We watched the end of Season I tonight of the 30 Rock DVDs
my sister gave me for my birthday, and really laughed a lot. 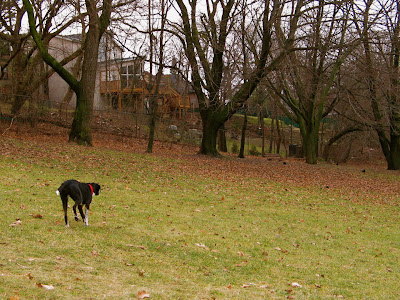 I found this picture of our dog Zoey hunting squirrels in our
local park and it made me think of a book I've joked about wanting
to write for a few years now called, The Philosophy of Dogs.
Most of the book would be about how dogs always think it's a
good day if you're in it. At the risk of sounding as corny
as Sarah Palin, my dog Zoey and her obsession with
squirrels seems like the perfect allegory for what most of
us do in life, especially in art. Zoey pursues a squirrel
with slow and careful deliberation. She doesn't run or
carry on until she's a few feet away from her target. And yet she
always misses. The squirrel always gets up the tree. Except
for that one time outside our house when by accident she
caught and killed a squirrel. I swear she felt badly all day
after that. Let me clarify right here that I don't
ever want Zoey to catch a squirrel, and I wouldn't let her
hunt them if I thought she would catch them.

I'm not talking about the thrill of the chase, which I know
is a tired cliché, I'm saying it's about process. Zoey puts
every fiber of her being into the process of catching the
squirrels she doesn't catch -- and here's the kicker -- she
loves that process. She is more excited in fact by hunting the
squirrel with great care on a beautiful day in the park,
than she was the day she actually caught one.

That's what I'm trying to learn as an artist. No painting
isn't a hunt, and I'm not going to catch a painting. But
painting is a focused attempt to catch an idea, and yet
the pleasure of the act is not in the completion, but in
painting -- watching colours come together to form
an idea that combines (for me) reality (the person,
object, landscape to be painted) and my own thoughts
and goals, to create a piece of art. Okay -- maybe it's
the end of the week and I'm just too tired. So
give me a break and I'll lighten up. I'm just saying.

Maybe what I'm talking about is this mania for
producing a great work of art every day that the
blogs seem to foster. You can go out every day
and try to paint, but you're just not going to bag
a squirrel every day. (Eee haw -- I do sound like Palin),
but you know what I mean. This whole concept would
have been preposterous to some of my favorite
painters of yore. They would have guffawed
heartily at the thought of artists turning themselves
inside out to make a workable work of art every
single day. Painting -- yes -- they'd get that, it's
a great idea to paint every day, but you don't get
a Sargent (my personal hero) in a day, unless
you're talking about the watercolours. He worked for
40 sittings with his portrait commissions. So
maybe some of us should give ourselves a break,
like Zoey does when she doesn't get the squirrel.
I'm going to start right now with myself, because
I'm turning in, and I haven't bagged a Sargent, or
even a laudable Muir today, but I've moved
brushes and paint around on a canvas, and thoroughly
enjoyed the process.

Have a loving-the-act-of-painting day.
Posted by Barbara Muir at 9:41 PM

Email ThisBlogThis!Share to TwitterShare to FacebookShare to Pinterest
Labels: Zoey and the squirrels. art and process. time for rest

I gotcha. And it's easy to see how much you love the process when we see you start and then take a painting to finish. One of my favorites is the potrait you did of yourself. The one with all the brushes in your hand.

I like the finished products too. Sometimes I absolutely dazzle myself looking at a painting and wondering
how I did it.

But I wouldn't paint if it wasn't
a treat to do so.