There was lots of discussion at school today about the Obama
win. Everyone is a political analyst and everyone was reviewing
how it happened, why it happened. But most of all people
all over the school, and on my street and everywhere I went
today were slapping hands in triumph and laughing.

I do believe that this ushers in a new world order -- not in the
crazy ominous way that Obama detractors were afraid of.
What I believe is that the man Obama intends to share his
win with all Americans, and be a consulting, caring, honest,
fair and thoughtful president. He inherits a set of problems
that as he says may not be corrected in one year, or even
one term. He is a realist. Naysayers today were saying
that all of this talk about hope and change has given people
unrealistic expectations. I don't think that's true. I think
it has been the people's message, that they want their country's
integrity given back. I think Obama can do that, and will.

It seems fitting to me that a tall, handsome, kind, honest
man should be chosen by history, at a time when another
tall, handsome, kind, honest man is becoming 19. This
is a birthday my own son will never forget, and Obama is
a role model, that any sensible mother would want for
her son. In fact I think he was elected for his measured,
and electric way of speaking, his intelligent consideration
of the questions posed to him, his steadfast attachment
to his principles and to setting a high standard for himself.

The young man in this painting today is my son, Sam. 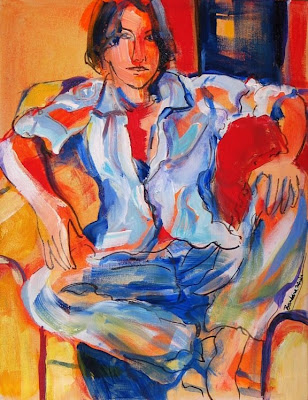 Sam after the dance
acrylic on canvas

12 x 14 inches
He will turn 19 Friday, in this momentous week, and is lucky
to become a man at this moment in the history of North
America. He is blessed to see that an intelligent man,
with moral fortitude, and brave conviction can do
just about anything he sets his mind out to do.

It is indeed a happy week, and a happy day.

Have a celebratory, and rejoicing day.
Posted by Barbara Muir at 7:40 PM

Email ThisBlogThis!Share to TwitterShare to FacebookShare to Pinterest
Labels: Barack Obama, more about that., Sam's birthday

Hi Barb!
An early Happy Birthday wish to Sam! This is a special week for you. I wonder what is in store for his birthday? A special dinner...cake...yum!

Yes we shall see how things develop with the new president-elect. He has a big job in his hands for sure.

Your painting of your son is wonderful. Love the colours and how you have captured the pose of a young man. I wish I could see all your paintings in person. Lovely.

Have a lovely day and end of the week and birthday celebration too.
Judi

Happy Birthday to your son Sam!!!! What a wonderful blog so rich and true....and the wonderful loose sketch is exhilarating....I bet you are quite a teacher!!!

Why don't you arrange a time to come
and see my paintings?

You live close enough that we could
do that someday. I need fair warning
so I can clean up the house!

Thanks for the kind wishes.

Thanks so much. I try to be a good teacher -- I hope I am. I like this
little sketch painting too. Sam has been one of my best models. I had an idea that I could sketch in marker, then paint over it, the way I do in some of my small still life work. It
was an experiment and fun.