I wish I could be in Chicago right now, or with any
of my American friends on the blog. If you didn't
vote for Obama, it doesn't matter at all to me.
But if you did, congratulations. I would have voted for
him, if I could. I have been so impressed by Obama
since the first time I heard him speak. All through
this long campaign I've been getting emails from
Barack, Michelle and all of his key supporters, but
as a Canadian, I could not contribute to his campaign.
It is my sincere feeling, that America and the rest of
the world have won a magnificent victory tonight. 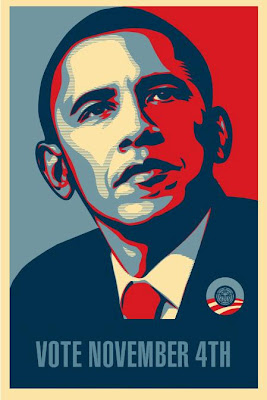 I didn't want to speak out forcefully about the election,
because America is not my country, and art has no
country. It transcends country, political
party, and even time. It lives on long after this momentous
night. So if you did not vote for Obama, and you are
American, forgive me this brief indulgence. I know
that for my friends in the most diverse city in the
world -- Toronto -- where I live, this win means a
change in the way the world views people. It
also means the triumph of intelligence, deep thought,
true concern for people's well being over the greed,
deception and power of the Bush administration.
I know Obama isn't perfect, and he will definitely feel the
weight of his office, in the current global financial and
political climate. But he has elevated America in the world's
eyes again. And I believe he will live up to his promise.

Have a celebrating-your-private-wins day.
Posted by Barbara Muir at 6:31 PM

My biggest hope is that our country will pull together and be on the same side for awhile. Wouldn't that be peaceful? Thanks for your good wishes for our new leader!

Let us all hope that we can as Laurel says, pull together. It has been many years of madness and greed in control.

Barbara, thank you for your well wishes. Maybe for bit we can all celebrate this amazing moment in time and then go to work being a stronger and gentler nation.

When you look at the map of blue and
red states, that seems like a big
challenge, but I certainly
give the idea 100% support.

Canada has a similar problem. The cities are diverse, the rural areas
not so much.

But you know what? The world is changing, and this win is proof of that.

Everyone I've spoken to today is both exhausted and ecstatic.

We are all looking forward here!! Thank you for your support Barbara...and I apologize for being so late in replying.....life !!!

There's so much going on I think it's a miracle that we keep doing this.

So you never have to worry about me.
I'm delighted whenever you make a comment here.

I am overwhelmed by Obama's triumph and sooo happy! And I agree, Barbara, the world is changing - even if its only little by little...

Little by little is a start isn't it.
Yes, we were all so excited here.
People are still exhausted just from being so happy.